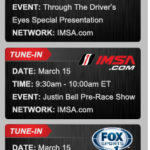 This weekend TUDOR United SportsCar Championship competitors will take the green flag at the 62nd Annual Mobil 1 Twelve Hours of Sebring Fueled by Fresh From Florida. The event also serves as the second of four races that comprise the Tequila Patrón North American Endurance Cup.

Prior to the start of the Mobil 1 Twelve Hours of Sebring Fueled by Fresh From Florida, IMSA.com will feature two pre-race shows. The first, “Through the Driver’s Eyes, Driven by Continental Tire,” a 45-minute program narrated by former Indianapolis 500 champion Dario Franchitti, provides a unique, behind-the-scenes look at many top IMSA drivers and teams.

Following “Through the Driver’s Eyes, Driven by Continental Tire,” IMSA.com will feature a live pre-race show from the Sebring grid hosted by popular commentator Justin Bell. The show will include driver interviews and pre-race activities as teams make their final preparations for the grueling 12-hour battle.