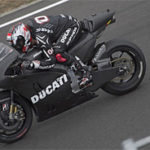 Ducati has “significantly reduced” its deficit to MotoGP rivals Honda and Yamaha ahead of the 2014 season, according to Ducati Corse general manager Luigi Dall’Igna.

The Italian manufacturer announced a radical change of direction earlier this month, confirming it would abandon its Factory status and instead run as an Open entrant.

That move provoked Honda’s ire however and ultimately led to the impromptu formation of a third tier, Factory 2, under which Ducati will now compete in 2014.

Dall’Igna said that strategy, coupled with a strong pre-season, has helped Ducati make real progress compared to Yamaha and Honda’s factory outfits, and boosted its bid to end a win drought that stretches back to October 2010.

“The choices that we have made will allow us to move forward and improve,” said Dall’Igna.

“We are satisfied with the lap times in the last tests, but also the consistency of the times, which are backed up by the riders’ comments.

“Ducati has significantly reduced the gap to its rivals and we are confident we can make further steps forward during the season.”

Andrea Dovizioso, who claimed a best finish of fourth during his first season with Ducati in 2013, also believes the outfit has made significant progress over the winter.

“I am very happy with the way the pre-season tests went because we managed to improve more than expected, and this gives me a lot of confidence,” he explained.

“Thanks to the work of Gigi, and by making a few balance changes, the bike is now more manageable, goes better and we succeeded in doing the times we did in the recent tests.

“We still have a few doubts about our effective race pace [but] in any case we have reduced the gap from last year and today we are much more competitive.

“We still have to improve to arrive at the positions where we want to be, but I think that in the first race we will manage to start close to the front.”