It wasn’t long after RACER‘s Robin Miller broke the news about Jacques Villeneuve’s return to the Indy 500 that the negativity began.

The first text I received came from a friend who works in the IndyCar paddock: “Great to see IndyCar bringing in a retread like Villeneuve for Indy…is that the best they could come up with?”

Love for the 1995 Indy 500 winner’s return after a 19-year absence has also been mixed on social media, with variations of, “Why bring in a washed-up guy who says he’s too good for IndyCar?” and, “How does this guy get a ride when young American drivers like Sage Karam and Conor Daly are out of luck?” serving as common sentiments.

A retread? Washed up? An elderly thief robbing IndyCar’s next generation?

I’ll admit that I don’t understand the criticism on this one, and you can count me among those who can’t wait to see 42-year-old Villeneuve’s return to Indy car racing. The Indy 500 is rife with traditions, and Jacques’ return to go for his second win fits the bill perfectly.

It might sound like a practice from the Stone Age for newer Indy car fans, but it wasn’t so long ago that stars and winners of the “500” like Villeneuve made annual treks to try and qualifying for the great race. Others simply raced well into their 40s and 50s without fans feeling the need to hurl insults and criticism their way.

The almighty A.J. Foyt earned four Indy 500 wins, retired multiple times at the end of his career, and added two more trips to Indy before calling it a day. He finished ninth on his last outing in 1992…at the age of 58 (ABOVE, IMS archive photo).

The 1987 season was the last full-time drive held by three-time Indy 500 winner Johnny Rutherford, yet he returned to Indy five more times from 1988-’94 and was cheered every step of the way.

Two-time Indy winner Gordon Johncock completed the 1984 season, followed Foyt’s routine of multiple retirements afterward, and finished sixth at Indy in 1991 at the age of 54.

1986 Indy 500 winner Bobby Rahal made his final start at the age of 42 in 1995, finishing third. Mario Andretti, who turns 74 today, farewelled the Indy 500 after 29 starts​ at age 54.The late Stan Fox’s final start was made at 42. Japan’s Hideshi Matsuda claimed 10th on his final start at 44. Hell, even Danny Ongais, who fell off the radar for years at a time, was still trying to make the grid at 56 – almost 15 years after he had a steady drive.

Granted, I’m not implying that all of those tail-end runs were positive; some of the greats acknowledged it was time to bid farewell to the Brickyard, and some failed to qualify, but that doesn’t diminish the impact they made on the event, the storylines they generated or the thrill they gave their fans. The draw of the Indy 500, especially to those who were there during its glory days, is undeniable.

As much as the race is about drivers and cars, it’s also for the fans and those who want to make connections with the current generation and to cheer on some of the aging lions that made impressions back in the day.

I hate to say it, but putting a Karam or Daly in Villeneuve’s seat would have zero impact on the sport at the moment. It might seem like a travesty to some inside the I-465 loop, but outside of the Indianapolis news bubble, it makes perfect sense. The kids have the potential to become future stars of IndyCar, but in 2014, and with the series (not to mention the 500) searching for ways to bring viewers back to the sport, backing a past Indy winner and F1 champ is a no-brainer.

Think of Villeneuve as a Trojan Horse. If he can draw in some of the former fans who checked out when CART was dropped in favor of the IRL, the experiment will be a success. If they tune in to see JV and happen to learn about the young guns in the series–Hinchcliffe, Rahal, Newgarden, Munoz and others–it’s an even bigger win for IndyCar.

Having watched Bump Day turn into a drama-free day of practice, and with few other Indy 500 entry surprises on the horizon, the IndyCar Series now has a great thread to weave with the reappearance of Villeneuve. How will he fit in with Schmidt Peterson Motorsports teammates Simon Pagenaud and Mikhail Aleshin? Can he make the field? Will he be the same fast and fiery Villeneuve that ruined Scott Goodyear’s day in 1995? Does he have a legitimate chance of drinking milk in Victory Lane for the second time?

And with Helio Castroneves looking to join the four-time winners club, Tony Kanaan looking to repeat his breakthrough Indy 500 win, Scott Dixon pursuing win number two and Juan Montoya on the prowl to repeat his lone victory in 2000, Villeneuve’s pursuit of a second win is a nice addition to the theme.

Villeneuve, despite his age and time away from Indy car racing, has remained active and while he’s probably surrendered a few tenths since his prime, there’s every reason to believe he’ll get the maximum out of SPM’s Honda-powered Dallara DW12. He left CART after two short, mercurial years. Like Montoya’s departure in 2001 after two stunning CART seasons, I want to see how JPM and JV stack up against the deepest field of Indy car talent that has ever been assembled.

And while we’re at it, how do we get 2003 Indy 500 winner Gil de Ferran to dust off his helmet and go for another win on the 10th anniversary of his first? Don’t take this the wrong way, current generation, but I’d put money on old GdF pulling it off…​ 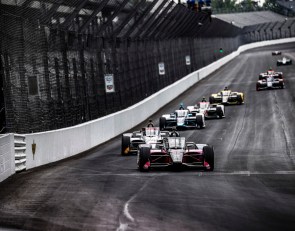