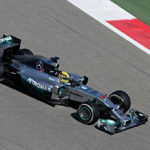 Lewis Hamilton comfortably topped the morning running during the third day of Formula 1 testing in Bahrain.

The Mercedes driver was well clear of the rest of the field as his team sent him out for short runs that were focused on trying different setups. Hamilton adopted the tactic of slowing for a cool-off lap in between his faster efforts, something that Jenson Button was also doing for McLaren at the same time.

The two silver cars were setting the pace with that strategy, although Button was eventually usurped for second by Esteban Gutierrez’s Sauber.

New Lotus signing Pastor Maldonado got his first taste of the team’s E22 in public, as the team set to work on recovering the lost ground from a difficult first couple of days with Romain Grosjean.

Maldonado was relatively active on track in the early part of the day, but he then spent a long time in the pits after reaching 18 laps. The E22 briefly returned to the track shortly before 1 p.m. local time, but it was not out for long before stopping and causing a red flag.

Another team experiencing delays in the morning was Force India. Sergio Perez was the last driver to take to the track as his crew was held back by overnight work taking longer than it expected.

Daniel Ricciardo got a few laps on the board as he took over Red Bull’s troublesome RB10 from Sebastian Vettel, but the world champion team continued to run at a cautious pace as it tries to get some mileage on the board.

Aside from Marussia, which caused the only red flag of the morning when Max Chilton came to a smokey halt at Turn 4 early on, the team with the least laps in the morning was Ferrari.

Kimi Raikkonen made a handful of appearances on track early in the day, but by the halfway stage he had only 12 laps to his name and was seven seconds off the pace set by Hamilton.

The Williams of Valtteri Bottas topped the lap count, although the Finn did not post a time as the team focused on pit stop practice for its race crew.