Veteran Canadian IndyCar, sports car and NASCAR racer has announced the formation of his own team, Tagliani Autosport, to mark his return to the NASCAR Canadian Tire Series for the 2014 season.
Tagliani unveiled the No. 18 Team EpiPen, co-sponsored by Dicom Express entry to fans and media at the Canadian Motorsport Expo in Toronto powered by Inside Track Motorsports News.
Partnering with Alex in the new Tagliani Autosport venture is longtime friend and business associate Colin Livingston, the president of CanTorque Inc. of Edmonton Alberta.
“One word best sums up Alex Tagliani as a driver, ambassador, friend and now as co-team owner – excellence. We are going to operate Tagliani Autosport at the highest level and give our sponsors and fans the best racing experience imaginable,“ Livingston said.
Tagliani will continue his partnership as brand ambassador with Pfizer Canada Inc., the Canadian distributor of The EpiPen epinephrine auto-injector for the program.
“As someone with a severe allergy to peanuts and tree nuts, I’m extremely happy to once again team up with Pfizer Canadaand Anaphylaxis Canada to raise awareness of food allergies and anaphylaxis,” said Tagliani. “I’m extremely honoured EpiPen has come on board with Tagliani Autosport as a major partner. I’m extremely pumped for an exciting summer of racing with the NASCAR Canadian Tire Series and meeting fans right across Canada.”
Tagliani continues to work toward other opportunities in different series in the first phase of his racing program, but he’s planning to drive the No. 18 NCTS entry in as many of the 11 scheduled races as possible this season.
“Having a regular entry in the NASCAR Canadian Tire Series is an addition to my program and gives our Canadian sponsors much more activation opportunity and visibility,” he said. “Plus, as a driver, I want to race as much as I can during my summer, so I will do as many of the NCTS races as I can. But when there is a conflict with other events, we plan to scout out a substitute driver from the vast crop of racing talent that’s available from across Canada.”
”Pfizer is pleased to be entering the NASCAR Canadian Tire Series as Alex Tagliani’s title sponsor,” added Allen Van Der Wee, general manager, Global Established Products Business Unit at Pfizer Canada Inc.  “We are looking forward to partnering with Alex for a second year to raise awareness for food allergies and anaphylaxis management.”
Tagliani also announced the second year of the Summer of TAG (Treating Allergies with Genuine care), supporting his charity of choice, Anaphylaxis Canada, in their efforts to engage Canadians in a conversation about effective management of food allergies and what to do in the event of a reaction.
This spring, Tagliani will visit school students in three Canadian cities, Montreal, Toronto and Edmonton to raise awareness for anaphylaxis management.  Food allergies is a growing public health issue in Canada with close to 2.5 million Canadians affected by at least one food allergy, including Tagliani himself.
With the goal of getting school children actively involved with Team EpiPen, Tagliani’s school visits will coincide with the launch of a racecar design contest and a second edition of the Helmet Design contest. These two initiatives will give students the opportunity to see their allergy awareness message and designs appear on the Canadian driver’s car and helmet. The helmet with the winning design will be auctioned off at the end of the season to raise funds for Anaphylaxis Canada.
“We are very excited to launch the Summer of TAG again this year,” said Laurie Harada, Executive Director of Anaphylaxis Canada. “As the mother of a son with multiple food allergies, I appreciate how Alex can inspire young people, encourage them to follow their dreams, and not let food allergies define them.”
Anaphylaxis Canada is the national leader in advocacy and education for people with food allergies. The organization’s approach to reducing the risk of anaphylactic reactions in both children and adults is focused on self-management, community engagement, understanding, and respect. 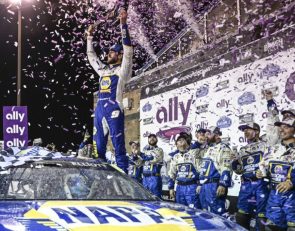