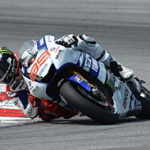 Jorge Lorenzo says MotoGP’s 2014 regulation changes have compromised Yamaha’s bike and made it “difficult to control.”

Under this year’s rules, factory efforts are limited to just 20 liters of fuel – one less than last year – for each race. Yamaha has therefore had to rethink its design and electronic maps, but Lorenzo says its initial solution has hurt the feeling and performance of its 2014 bike.

The Spaniard finished fourth fastest, the best part of a second down of 2013 champion Marc Marquez, after the first day of pre-season testing at Sepang.

“The new regulations of 20 liters is making life quite difficult because we had to change quite a lot of the electronics,” Lorenzo said. “The bike has changed quite a bit compared to last year, [and] is not working exactly how I would like. It is not as smooth as before – it’s a little bit more aggressive and more difficult to control.

“For the moment we have quite a lot of problems in the corners, but we are working on solutions. I think we have time before the first race.”

In addition to the opening test at Sepang, which concludes on Thursday, there will be additional three-day tests at the Malaysian circuit and at Losail and a three-day tire test at Phillip Island for the factory riders before the season commences in Qatar on March 23.