It’s early of course, but trends are emerging. (LAT photo) 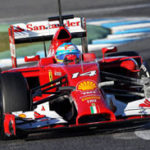 Ex-Formula 1 designer Gary Anderson answers the key questions raised from what we have seen so far from pre-season testing.

The Ferrari F1 F14 T sounds a lot different to the other cars under braking. Why is this?

It is incredibly smooth on the downchanges. Everyone else is blipping the throttle a lot more and it’s difficult to say why the Ferrari is so smooth in comparison.

All the cars have a zero torque loss upshift, seamless shift, but nobody has done that on the downshifts. With the ERS recharging from the rear wheels and the need to downchange under braking, it now might be a good idea.

We don’t know for sure, but perhaps Ferrari is ahead of the game with such technology.

Mercedes had another strong day, with the second fastest time and most laps completed. It seems the Silver Arrows have been the big winner after three days at Jerez?

It’s very impressive. Mercedes has managed long runs, hitting the 20-lap mark which is very good. It will take five to 10 laps to build up all the temperatures and this length of run shows that the cooling is stabilized.

Even if the car is getting too hot, it is at least controllable so it will be easy to adapt the cooling. After three days, Mercedes should be happy.

The three Renault cars managed only 43 laps today. How disastrous has this test been?

Renault has been in a real battle to solve a problem related to the ERS functions. It was felt the problem was fixable last night and it seemed progress had been made when Jean-Eric Vergne went out in the final hour and did a 1m29.915s lap at the end of a five-lap run. Unfortunately, on the sixth lap, it all fizzled out on the pit straight and when he tried to go out later on he didn’t even make it out of the pit lane.

But the engine sounded much cleaner and it seems that Renault is at least making some progress, even though there is a lot of work to do.

Red Bull completed a grand total of three laps today. Is this the end for its world championship hopes?

I doubt it very, very much. There’s nothing as resilient as an Adrian Newey who is very unhappy with life. Red Bull will sort itself out.

We have seen problems for all the Renault teams and if any team has a background of understanding that the car needs to perform on the circuit is Red Bull.

Losing these days of testing is not a good thing, but Red Bull is equipped to recover without hurting its championship hopes.

Which cars have caught your eye from trackside?

The McLaren seems to be a nice car to drive. The front end isn’t exceptionally positive, but it looks well-balanced and changes direction well. There is no sign of the inherent understeer of 2013.

The Ferrari looks like it is missing a bit of downforce. In the medium- to high-speed corners, especially the one onto the back straight, you can hear a bit of tire squeal and in the lower-speed corners the rear is giving up on corner exit. With these turbo engines being quieter, you can now hear the tires crying enough.

The difference between Kimi Raikkonen and Fernando Alonso is that Fernando loves to leave big black lines on the track, primarily to make a point to the team about where the car needs improving.

The Mercedes looks good, rides the curbs well but does have a little understeer. Perhaps that is because it is set up to protect the rear tires.

The Mercedes-engined Williams looks good with Felipe Massa driving as it did with Valtteri Bottas. The front end is positive but not at the expense of the rear and in the middle of the chicane, the car changes direction well.

What do you make of the new Marussia, which appeared for the first time this morning?

Compliments to Marussia for driving out of the pits with a brand-new car and being able to drive back – an impressive feat that many others struggled with!

It’s a neat and tidy design with an anteater nose, but it has more of a nose section than many others.

It has elegant lines and there’s nothing too dramatic, so let’s give the team time to get upgrades on the car before the first race.