After waiting nearly three hours for Red Bull to hit the track, Daniel Ricciardo managed just half a lap before grinding to a halt at Jerez. Technical expert Gary Anderson looks at the problems the world champion squad is having.

The reason for the stoppage hasn’t yet emerged, but this is worrying for Red Bull given that the new RB10 has managed a grand total of 11 complete laps in two and a half days.

The technical rumor mill in the paddock suggests that Renault is less than pleased with Red Bull’s installation of the control electronics in its 2014 car. While this is just a rumor, Red Bull has done the fewest laps of any of the teams that has run so far, so it’s clear something has gone wrong.

Changing an installation like this is not easy because there simply is not any spare space left over in a car, which means if this is at the root of the problem Red Bull will almost certainly have to make a fix work with what space it has. There will be a few sleepless nights for Red Bull before Bahrain, and Renault is also having its troubles, with all three of its cars struggling to string two laps together.

From the start of this test, Red Bull, Caterham and Scuderia Toro Rosso have managed only 68 laps between them as of 12:30 today. 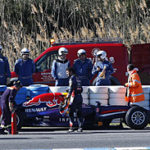 Red Bull has now lost close to a quarter of its pre-season running, but when you have a problem like this the priority is not to panic.

You only get one hit to fix it in time, so the key is to recognize the problem, understand why it is happening and focus on the fix because you cannot afford to do half a job. This is where good management comes in, because it’s quite difficult to get people to focus and not run around like headless chickens.

There are two weeks between this test and the next one in Bahrain, and with the manpower Red Bull and Renault have between them there are adequate resources to do the job.

I doubt there is anyone at Jerez who is using all the potential of the car and wringing its neck just yet as mileage is still the priority. So that includes not using the electrical power to its maximum or the full 15,000rpm. In fact, the paddock grapevine has it that Mercedes is running at a maximum of 13,000rpm and Ferrari just a little higher than that.

Rome wasn’t built in a day and Red Bull and Renault are having a harder time than anyone else, which is never a good place to be. But I would not be writing either off for the Australian Grand Prix just yet as there is still time.