Jade Buford won his second consecutive Continental Tire SportsCar Challenge pole for the BMW Performance 200 at Daytona International Speedway on Thursday, running a lap of 1:55.824 (110.651mph) in the No. 15 Multimatic Motorsports Ford Mustang Boss 302.R co-driven by Scott Maxwell.
Buford, who broke his own track record, will be joined on the front row by Nick Longhi, second fastest in the Grand Sport (GS) class with a lap of 1:56.105 (110.383mph) in the No. 13 Rum Bum Racing Porsche 911. A year ago, Buford won his first career pole with a lap of 109.977mph in a Multimatic Motorsports Aston Martin Vantage.
The two-hour, 30-minute race begins at 1:45 p.m. ET on Friday. Round 1 of the 2014 Continental Tire SportsCar Challenge will be televised on FOX Sports 2 on Friday at 6 p.m. ET.
The red flag waved early in the session, with the lengthy delay giving Buford and his fellow GS competitors the opportunity for only one flying lap following the restart.
“We knew we were not as fast as the BMW or Porsche teams, so I knew it would take strategy to set up a good lap to have a shot,” said Buford, who now has seven career poles. “I gave it everything on the one lap that counted, and we made it count.”
Longhi ‘s first lap was his quickest in his bid for a second Daytona pole in three years.
“Obviously, in such a competitive series, you’ve got to go for it right away,” said Longhi, who co-drove to the 2013 GS title with Matt Plumb. “On my first lap I got out just about everything I could for the car. Unfortunately, I got caught in the middle of traffic following the restart and lost any chance of going faster.”
Trent Hindman qualified third, running 1:56.230 (110.264mph) in the No. 46 Fall-Line Motorsports BMW M3 co-driven by John Edwards. Fourth fastest was Lawson Aschenbach, 1:56.625 (109.891mph) in the No. 01 CKS Autosport Chevrolet Camaro Z/28.R.
Mosing Takes First ST Pole With Daytona Record Lap
Street Tuner (ST) qualifying saw Jeff Mosing capture his first career pole with a track record lap of 2:04.769 (102.718mph) in the No. 56 Murillo Racing/Mosing Motorcars BMW 328i co-driven by Eric Foss.
“Ken (car owner Murillo) gave us a fantastic car, and it was fast in both pre-season testing and practice this week,” Mosing said. “I knew I would be up there somewhere in the top five, and it’s fantastic to win the pole. I have a fantastic co-driver. If you think I’m fast, just wait. Eric and I have similar driving styles, and that’s because he’s been coaching me since the fall of 2008.”
Chad Gilsinger ran his second-fastest time of 2:04.861 (102.642mph) on his checkered flag lap in the No. 93 HART Honda Civic Si co-driven by Michael Valiante. Tyler Cooke qualified third in the No. 81 BimmerWorld BMW 328, 2:04.873 (102.632mph), followed by late addition Bryan Heitkotter in the 2013-winning No. 33 Skullcandy Nissan Altima co-driven by Vesko Kozarov, 2:05.409 (102.194mph). 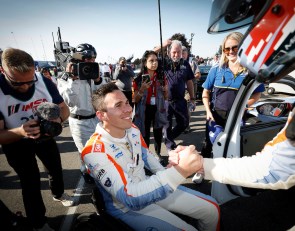 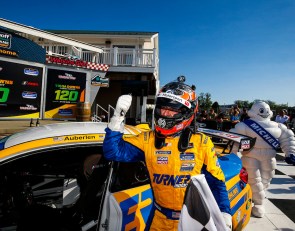 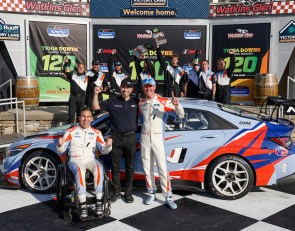