The Trans Am Race Company has announced an expanded 11-event schedule for the 2014 Trans Am Championship, beginning Sunday, March 2 at Sebring International Raceway.

“It is with great pleasure that we announce the 2014 Trans Am schedule,” said John Clagett, president, Trans Am Race Company. “We firmly believe that we have assembled for our drivers and fans one of the best schedules in road racing, with venues that will allow for the continued growth and success of the Trans Am Series.”

“In these 11 tracks we have some traditional homes of Trans Am and other new exciting venues. In working with these tracks and partners we feel that Trans Am is now, more than ever, capable of delivering a level of racing worthy of the Trans Am legacy that everyone can appreciate and enjoy.”

The 2013 Series featured multiple entries in the high 30s, including a decade-high 41-car entry at the 2013 finale at Daytona, and the series expects those numbers to rise.

“We are very excited to see what 2014 has in store for Trans Am,” said Clagett. “We saw outstanding growth across all classes in 2013; and with multiple commitments from additional drivers, teams and partners coming in every day, we expect the 2014 Trans Am Championship to be one of the best years Trans Am has seen in quite some time. The future of Trans Am looks incredibly bright.”

2013 stood as a year of landmark change for the Trans Am Series, and saw the legendary American series return to levels of competition unseen for over a decade. In 2013 Trans Am Championship averaged more entries per race than all but two seasons since 1991, those being 1998 and 2000encouraging signs for Trans Am and fans of the Series going forward.

The 2014 Trans Am Championship:

Sunday, March 2: Sebring International Raceway: Trans Am returns to the Series’ birthplace at Sebring for the second consecutive year and Trans Am’s ninth appearance on the renowned North American course. The event will be held in conjunction with the Sportscar Vintage Racing Association (SVRA), putting the past and present of Trans Am on display.

Sunday, March 9: Homestead-Miami Speedway: Trans Am makes its fifth appearance at Homestead-Miami as it continues its tour of the Sunshine state with SVRA and the second event of back-to-back race weekends to open the season.

Saturday, May 10: Road Atlanta: Trans Am returns to Road Atlanta, in a continuation of its southern tour, for the 20th time at the Georgia track where the likes of Peter Gregg, Dorsey Schroeder, Tommy Kendall and many others have made their mark. Trans Am will join the Formula Drift Series in a showcase of modern motorsport.

Sunday, May 18: Canadian Tire Motorsport Park: Trans Am takes part in the Victoria Day SpeedFest Weekend for the third year in a row in what has become a modern-day Trans Am tradition of opening the Canadian track for the year. Also in attendance will be the NASCAR Canadian Tire Series and Pirelli World Challenge (Touring/ B-Spec).

Sunday, June 1: New Jersey Motorsports Park: Trans Am joins ARCA, Pirelli World Challenge (TC/TCA/TCB) and Pro IT for the Weekend of Thunder as the Series returns to NJMP after a one year hiatus.

Saturday, June 21: Road America: The Trans Am Series makes its 34th appearance at one of the nation’s legendary road courses and one of the fastest tracks on the Trans Am Circuit, in conjunction with NASCAR Nationwide.

Saturday, August 16: Mid-Ohio Sports Car Course: Trans Am returns to Mid-Ohio for its 26th appearance, once again alongside NASCAR Nationwide in the North American heartland.

Sunday, August 31: Brainerd International Raceway: The Series heads north for its annual pilgrimage to one of Trans Am’s historic homes for the 25th time as a participant in the 27th Annual Muscle Car Shootout.

Sunday, September 28: Virginia International Raceway: The Trans Am Series heads toward its climax as the Series returns to VIR for only the fourth time, teaming up with SVRA for the third time in 2014.

Saturday, November 15: Daytona International Speedway: Trans Am returns to Daytona for the second year in a row with Historic Sportscar Racing for the 2014 Trans Am finale as the next group of Trans Am champions are crowned.

The Trans Am Race Company is currently working on a 12th event for 2014 and hopes to announce it in the near future.

“Look at how far Trans Am has come,” said Clagett. “We’re incredibly proud of what our competitors, teams and owners have accomplished. We’re seeing astronomical growth in all classes while continuing to improve the quality of racing, all done organically. As always, I encourage fans of all forms of racing to come out to the track, interact with the drivers, enjoy the race and see for themselves what the Trans Am Series is all about.”

As part of Trans Am’s continued commitment to fans every event ticket comes with paddock access so fans can experience everything the Trans Am Series has to offer firsthand, up-close and personal. 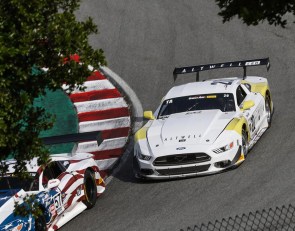