Dean Stoneman will test for Carlin’s Formula Renault 3.5 team at Aragon this week.

The 2010 Formula 2 champion was due to race in FR3.5 with ISR the year after his title triumph, before his career was interrupted by testicular cancer. Having returned to racing via  powerboats, then the Porsche Carrera Cup in Britain, Stoneman made his single-seater comeback for the GP3 finale in Abu Dhabi earlier this month and came close to winning race two.

Stoneman said that at present his priority was to maximize his open-wheel mileage, and he was open-minded about where to race in 2014. 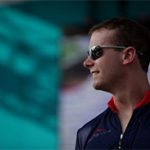 “After my comeback to single-seater racing in Abu Dhabi, the phone hasn’t stopped ringing with interest,” he said. “We thought it would be a good idea to take up an offer of the 3.5 test from Carlin before we make any decision about next year.

“It’s an option for next year for sure, but it’s also about getting some catch up time in the cars after missing two years of my career. I do like the World Series by Renault, they are serious bits of kit and this will be a good test as to where I am re fitness.

Team boss Trevor Carlin said he was excited to see how Stoneman fared after his Abu Dhabi performance.

“He was a revelation in Abu Dhabi and we look forward to seeing his pace in the FR3.5 car,” said Carlin.