The Scuderia shut down its Maranello tunnel late last year to work on correlation problems that had held it back, with Toyota’s state-of-the-art wind tunnel in Cologne being used instead for development work.

Although Ferrari is still in the early stages of evaluating its improved wind tunnel, engineering director Pat Fry is encouraged by progress.

“We have been back in there for a few weeks,” said Fry. “It’s being 100 percent used now, 24 hours a day, seven days a week, the normal thing. It is reasonable although it takes time for you realise how good a tool is.

“We have certainly made some reasonable improvements there. Time will tell if we are exactly where we would like to be but the signs are good at the moment.”

In order to assess the effectiveness of the Maranello wind tunnel, Ferrari has been conducting some tests specifically to ensure it is generating the same results as the Toyota.

“There are the normal things of repeatability, so we do a lot more repeats of things,” said Fry. “Some of the things we’ve done at Toyota, we are also doing — step changes trying to check it has got the same trends — and so far so good.”

Although the new 1.6-liter turbocharged V6 engines that will be introduced next year will be a significant performance differentiator next year, Fry has no doubts aerodynamic development will also remain vital. 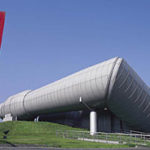 This means the effectiveness of Ferrari’s Maranello wind tunnel will be key to the team’s development for 2014, although as Fry points out it will be essential to start the season with the engine in good shape.

“Aero still remains a very dominant factor next year as well,” said Fry. “It is still going to be very important, although the balance toward engines is higher than it currently is, especially as you have to get it right at the start.

“You need your power unit package as good as you can at race one, because it’s quite difficult to upgrade it in the season.”