Customer cars, like this Tyrrell-run March driven by Jackie Stewart in 1970, were driven out of F1 by the end of ’70s, and smaller teams fear what their return might mean. (LAT archive)

Fears that Formula 1’s major players are secretly pushing to drive small teams out of business to bring in customer cars have emerged as the new Strategy Group meets.

Representatives of the FIA, Formula One Management and six teams — Red Bull, Ferrari, McLaren, Mercedes, Lotus and Williams — are meeting later on Monday to discuss future rule changes. The agenda includes future tire supply, tire testing, cost restrictions and other minor sporting and technical rules tweaks. There will also be discussion of the Listed Parts area of the rules, which ultimately defines the future of customer cars.

At the moment teams are strictly limited on what parts they can share with other squads, but a push to open up this area could allow whole cars to be sold in the future. This could change the face of F1, and lead to a scenario where there are only a handful of big teams left supplying the whole grid.

Force India deputy team principal Bob Fernley, whose is frustrated that his squad does not sit on the Strategy Group, believes that the return of customer cars is only possible if some of F1’s smaller teams are driven out of business.

“One would have to say, ‘What is the agenda?'” Fernley said. “On one hand, you have got four teams that are totally protected against all the rising costs because of the extra money that they have got.

“And the teams that have been disenfranchised are totally burdened with all the costs. So, the question is why is that happening? One would assume because it is to influence a different route for F1 in the future.” 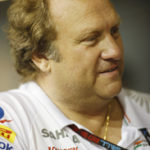 When asked if he felt there was a genuine desire among the top teams and sport’s chiefs for customer cars, Fernley (LEFT) said: “You cannot bring customer cars in unless you force teams out of business… and we are going in the right direction to do that.

“Am I saying that is right or wrong? That I am not sure about. But what I am sure about is that there is obviously clear evidence of a move, not only to disenfranchise teams, but to burden them with costs on a continual basis.

“I would assume the reason for that is to [make them] fail, which would allow the customer cars to come in.”

The majority of the increased revenue heading to teams as part of the imminent new Concorde Agreement is going to the larger outfits, while extra burden has been placed on everyone through extra outlay for entry fees, testing and new rules. This hits smaller teams very hard, according to Fernley.

“There isn’t a single initiative over the last 18 months that has not significantly increased the costs,” Fernley added. “All teams are looking next year at a Ł20 million [$32m] plus increase in costs. Four teams not only have that covered, but they also have reserves left over as well.”