Chalk up another win from the pole for Kyle Busch. And give the driver of the No. 54 Joe Gibbs Racing Toyota two legs up on a weekend sweep at Chicagoland Speedway.

In Saturday’s Dollar General 300, Busch won his 10th NASCAR Nationwide Series race in 20 starts this season, leading 195 of the 200 laps in claiming the record 61st victory of his career.

Busch became the first driver to win from the pole in NNS competition at Chicagoland, though he’s certainly no stranger to winning from the top starting spot. In Saturday morning’s time trials, Busch won his eighth pole of the season. He has converted seven of those into victories.

Joey Logano was second, but no other driver proved a threat to Busch’s dominance. Sam Hornish Jr. finished third and extended his lead in the series standings to 17 points over Austin Dillon, who came home fourth.

Having won Friday night’s NASCAR Camping World Truck Series race at Chicagoland, Busch will go for the second three-series weekend sweep of his career in Sunday’s GEICO 400 Sprint Cup race at the 1.5-mile track. That won’t be an easy task. During Saturday’s practice, the handling on Busch’s Cup car wasn’t optimal.

“I think we’re a top-10 car right now. That’s a little further off than where I’d like to start going into (Sunday), but we’ll just have to work through 400 miles and push hard and see if we can’t achieve the trifecta.”

Penkse Racing teammates Logano and Hornish agreed that they needed to find a little additional speed to compete with Busch on a regular basis, but they also defended their own records. Four Penske drivers have combined for 10 NNS victories this season.

“We’re not far behind we’ve won quite a few races this year,” Logano said. “But the 54 car is obviously our main competition every weekend. Where it’s at is hard to pinpoint. It’s probably a little bit of body, it could be some motor, it could be some of our chassis setups.

“We have to look in every little area to find a little bit of speed. It’s not like he’s a half-second quicker than us. He’s a tenth better, all day today It’s hard to pinpoint exactly where it’s at, because he drives away so fast you can’t figure it out quick enough.”

Having led 153 of the first 158 laps, Busch held a lead of more than three seconds when Brett Butler plowed into the back of title contender Elliott Sadler’s No. 11 Toyota as Sadler was slowing to enter pit road.

Lead-lap cars came to the pits on lap 160 four tires and fuel, leaving them with enough gas to finish the race comfortably. Busch was first off pit road for a restart on lap 164, but one circuit later, a caution for debris slowed the field for the fourth time.

Busch pulled away after a lap 170 restart and stretched his lead until Kyle Larson blew a left-rear tire and smacked the outside wall in Turn 2, spewing debris throughout the corner.

That wasn’t the last yellow. One circuit after a restart on lap 182, Justin Allgaier’s Chevrolet clipped the outside wall, bounced into Regan Smith’s Chevy and sent it spinning down the backstretch. Smith, who entered the race third in the series standings, stayed on the lead lap but restarted 18th when Busch led the field to green on lap 187.

Smith worked his way up to 13th by the finish but lost ground to Hornish, as finished Sadler, who ran 19th, one lap down.

With Smith and Sadler both having issues, dropping them to 36 and 44 points behind Hornish, respectively, the championship battle began to look more and more like a two-man contest.

“There’s still a long time to go,” Hornish said. “What, seven races? A lot can happen. We have to be smart about how we run it and all those things. One flat tire can lose you a bunch of points. I feel like I was pretty excited about where we were running at about lap 160, with how we were running.

“I think Austin was seventh, and we were running second and catching the leader a little bit. All of a sudden the yellow comes out, and we were running third, and he (Dillon) was second. We worked real hard to get back around there at the end, and I just wish we’d had a little more for the short run.”

Busch led the largest number of laps ever in a Nationwide Series at an intermediate speedway, eclipsing the 194 of 200 led by Dale Earnhardt at Charlotte in 1986. 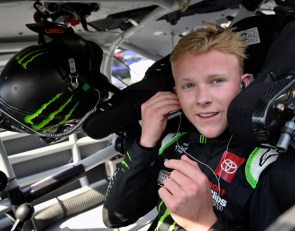 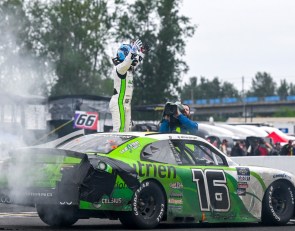 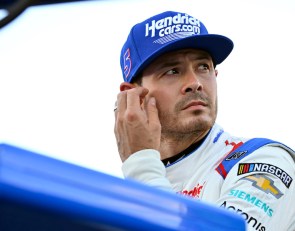 His tires chattering with age over the final few laps, Ryan Preece held off charging Zane Smith and Carson Hocevar to win Friday (…) 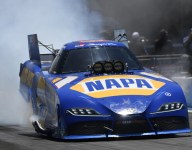 Top Fuel points leader Brittany Force made the quickest run in each qualifying session on Friday, taking the provisional No. 1 spot and (…)