Grabbing the lead for the first time after a restart on lap 240, Keselowski subsequently survived a seventh caution and a final restart to beat Brian Scott, the pole winner, to the finish line by 1.946 seconds in Friday night’s Virginia 529 College Savings 250, the 1,000th race in NASCAR Nationwide Series history.

With a dominant car and excellent work by his pit crew, Scott had led the first 239 of 250 laps before Keselowski grabbed the lead from the outside lane on the next-to-last restart and held it the rest of the way. The victory was Keselowski’s fifth in 12 starts this season and the 25th of his career. Regan Smith finished fourth, followed by Kyle Busch and Trevor Bayne. Series leader Sam Hornish Jr. finished sixth.

“This was one of those nights where it just didn’t work out for him,” Keselowski said of Scott’s attempt to win his first Nationwide race. “The only thing that I can really tell him, with the experience that I have, is that sometimes in racing you do everything right, and you still don’t win. This sport’s very fickle like that.

“Things just didn’t fall his way. That yellow that came out (on lap 229) just put him in a position that didn’t suit his team’s strengths, and it did suit ours, and we were close enough to capitalize.”

Specifically, Keselowski cashed in on his knack for anticipating and controlling restarts. Scott had issues with the final two, the first of which cost him the lead and second of which sealed the win for Keselowski. Scott asserted that the 2010 Nationwide champion beat him to the line on the penultimate restart and took off early before reaching the prescribed restart zone on the last one.

“On the last restart, I was shocked,” Scott said. “We weren’t even to the entrance to pit road, and he started going, which was two or three car-lengths before the restart zone, and he had me cleared before we even got to the exit of the restart zone (indicated by a red line on the wall).

“One, it took away a possibility for our team and everybody at Richard Childress Racing to contend for that win, and two, it eliminated what could have been an exciting race for the fans, if we could have been side by side going into the first corner and racing the way racing should be at these short tracks.”

Understandably, Keselowski had a different view of the final restart.

“I think I just caught him off guard,” Keselowski said. “The restart box is a zone, and we went right at the start of it and didn’t give him a second to catch up. That probably wasn’t the key to the victory, but it sure didn’t hurt.”

Scott dominated from the outset while Keselowski worked his way toward the front. By the time Keselowski cleared Busch for the second position on lap 195, Scott held a lead of more than 1.5 seconds over the No. 22 Ford. But slowly, inexorably, Keselowski began to close on Scott’s No. 2 Chevrolet.

By lap 210, the margin was 0.823 second. After Scott worked traffic on lap 217, his advantage shrank to 0.428sec, roughly three car lengths. But Scott pulled away to a lead of more than a second before caution for Hal Martin’s brush with the wall slowed the race on lap 229.

Hornish expanded his series lead to 16 points over second-place Austin Dillon, who was 12th Friday, and holds a 26-point advantage over Smith in third. 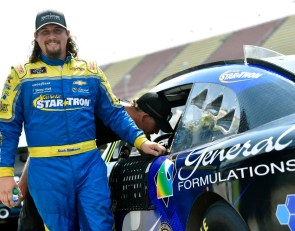 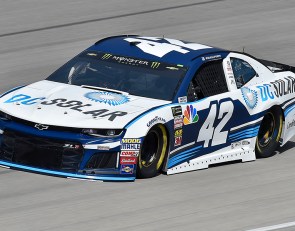