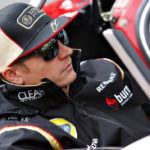 Kimi Raikkonen will not start 2014 contract talks with Lotus until the team can give him the assurances he wants about next year.

Although Lotus is now favourite to keep Raikkonen after the second Red Bull Formula 1 seat went to Daniel Ricciardo, the team is still working to conclude a financial deal with investor Infinity Racing.

Raikkonen revealed at Monza on Thursday that negotiations were currently stalled while he awaits answers.

“They know the reasons why there is no going forward right now, and until they sort out those issues we cannot talk about next year,” he said. “It is as simple as that. They know exactly the reasons.”

The Finn said it “wasn’t really a surprise” that Red Bull picked Ricciardo over him.

“I don’t think anything went wrong,” he said. “Probably they wanted a different thing. You go and ask them, I don’t know. For me it doesn’t really matter. It is fine and it is not the first time. Sometimes you speak with people and it doesn’t work out.”

Ferrari has been mooted as Raikkonen’s other 2014 option, and he said on Thursday there was nothing stopping him returning to the team where he claimed the 2007 world title, despite relationships worsening prior to his departure at the end of ’09.

“I never had anything against anybody and obviously certain things could have been different in the past in many areas,” he said. “Not just at Ferrari but for many teams.”