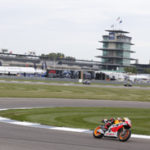 Graham Rahal and his Rahal Letterman Lanigan team will carry out IndyCar’s evaluation test on the Indianapolis road course on Sept. 4.

It emerged earlier this month that plans were afoot to test an IndyCar on the circuit as the series and the Speedway consider whether to add the road course to the championship schedule in 2014.

IndyCar competition chief Derrick Walker said the layout, currently used by MotoGP (pictured) and Grand-Am, could become a useful test venue even if the race plans did not proceed.

“It is important to look at all possibilities that we have in the existing layout to gain as much information as we can about how the car will perform and what changes we can offer to make it more competitive,” said Walker. “In addition to considering a potential race on the IMS road course at some point in the future, one of the advantages of maximising the current road course layout could be a future testing opportunity for IndyCar teams, especially since so many are based in Indianapolis.”

Rahal added that he was honoured to get the nod to carry out the test.

“Any time a driver can take laps at Indianapolis, even on the road course, it is a special day,” he said. “I am happy to have been asked to be part of this test and to provide some input on how an Indycar might perform at IMS.

“I have raced on the road course at IMS [in Indy Lights] so I already have a good idea of what to expect in an IndyCar over most of the track. It will be particularly interesting to run the car on different portions of the track, including the Turn 1 road course section.”

Several different configurations will be tried during the test. The present MotoGP layout operates in the opposite direction to the version Formula 1 used from 2000-’07 and has been revised in several places.