Bobby Labonte will miss this weekend’s NASCAR Sprint Cup race at Atlanta after a cycling accident. The 2000 champion broke three ribs in the incident near his home in Trinity, N.C.

Labonte was set to drive for Phoenix this weekend as it is one of the events where he is standing aside from his regular JTG Daugherty drive in favor of AJ Allmendinger. Mike Bliss will take Labonte’s place in the Phoenix Chevrolet for Atlanta.

The team announced on Wednesday that it will shortly be under new ownership. 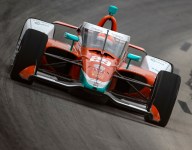