Power returns to victory amid controversy in Sonoma IndyCar race

Power returns to victory amid controversy in Sonoma IndyCar race

Will Power ended a 16-month winless streak with his victory in a controversial GoPro Grand Prix of Sonoma.

The Team Penske driver crossed the line 1.1 seconds ahead of Justin Wilson. But most talk afterward was of the pitlane collision between Scott Dixon and members of Power’s pit crew that resulted in a penalty for the New Zealander, relegating him to 15th on an afternoon that he’d otherwise controlled.

The incident happened when Dixon was exiting his pit box and clipped a tire being carried by Power’s right-rear tire changer it clipped the right-rear tire carried by Penske crew member Travis Law, which knocked him into airjack man Justin Bosch. Both were uninjured, and there were wildly differing opinions regarding whether Dixon had any opportunity to avoid the Penske personnel. But Race Control decided against the Target Chip Ganassi Racing driver, summoning him in for a drive-through penalty that initially dropped him to 21st.

“It’s probably the most blatant thing I’ve seen in a long time,” said a clearly seething Dixon, who implied that Penske’s crewman had provoked the incident deliberately. “I had a straight line and he walked into us.”

“Ultimately, we have a duty to protect everybody in the pit lane,” Barfield said. “If we have somebody who uses less than great judgement when they leave their pit box and we have an incident, then we have to make a statement by penalizing. And we’re going to make that call. There are a couple of different (video) angles, and clearly the 9 car crosses right into the 12 car’s space and that’s where the violation occurred. He was in the 12 car’s box for a good half-car length.”

Up to that point Dixon had been the dominant driver of the afternoon, and his exit proved to be a boon for his two closest title rivals in Helio Castroneves and Ryan Hunter-Reay. Both men had stood to lose a huge pile of points to the Kiwi, and instead came out of the weekend having extended their advantage.

Power kept himself in the hunt with the help of some aggressive restarts — one perhaps too aggressive, in the view of Dario Franchitti — but Wilson took a very different route to second place. The Brit had gone against the grain by starting on the black tires, and then had his pit strategy thrown into disarray when he was turned around early on and stopped out of sequence. But the combination of late-race cautions, a good car from Dale Coyne Racing and, during a couple of key points, better tires than the guys around him allowed him to work himself back into contention. 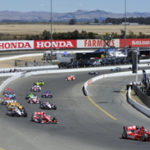 It was a more frustrating afternoon for Franchitti, who had led early on but then made a mistake and conceded a spot to Dixon. The Scot admitted that he would have fought harder had it been anyone other than his teammate trying to pass him.

Later, he was forced onto the grass by Power on a restart, a move that he felt should have earned the Australian a penalty.

“We were just trying to hang on to the leaders there, trying to get as close as we could,” said Franchitti. “We had that one restart where I went up to Turn Two there, got upside of Will, that’s when he drove me off the track. That’s when Scott had his drive-through, as well. It wasn’t a high point for the officials, I would say, in that section of the race.”

He added that he felt that continuing uncertainty about what was allowed may have played a role in the unusally high number of on-track incidents.

“Sometimes if you think it’s going to come off, you close your eyes,” Franchitti said. “You could see some of that happening today. As drivers right now, we don’t know what the rules are. We don’t know what is acceptable, what isn’t. You see penalties, you see non-penalties for the same thing.”

Power said he was surprised by Franchitti’s attitude. “I mean, we barely touched. That’s just racing,” the winner declared. “I’m surprised at his displeasure. Dixon did exactly the same thing to me when roles were reversed on the first restart. Dario seems to have a short memory, because in Detroit at the first corner, he hit me a lot harder and I lost a bunch of positions.

“It’s just racing. He’ll cool down. Double-file restarts, what do you do?  We’re side-by-side. Cars are going to touch. It’s not like I KO’d him into the wall.”

Team Penske was equally miffed about an aggressive moves on restarts by Marco Andretti, leading to a post-race exchange between Andretti and team owner Roger Penske.

“We got jumped by Marco twice where we were behind the car ahead of us, and Marco was three-wide going through the corner here before we got to the acceleration cone,” Penske said.

In all, a Sonoma record of seven cautions punctuated the afternoon, although Sebastian Saavedra was the only driver to exit the race early as the result of contact. The Colombian hit the barrier at Turn 9 after being tagged by James Davison.