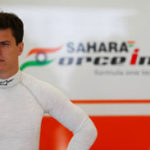 James Calado insists he put thoughts of a possible third driver role with Force India in Formula 1 to the back of his mind as he tested for the team at Silverstone on Wednesday.

Force India has made it clear that it is evaluating the GP2 front-runner at the young driver test. The team has a good record for assisting its junior drivers onto the grid: Paul di Resta earned his race seat after a year of Friday practice runs, Nico Hulkenberg revitalized his career in the same role after losing his Williams seat, and current Marussia racer Jules Bianchi was Force India’s number three in 2012.

Calado was fastest in the first half of the test day, and said he had tried to regard the outing as a “bonus” rather than an audition.

“What a great opportunity. It’s always what I wanted to do, so I’m over the moon,” he said. “It’s nice to have a go, to prove I have the speed. What happens in the future, who knows?

“This is an opportunity that has arisen to do the test, and that’s all I’m concentrating on. My job really is to concentrate on winning the GP2 championship; driving a Formula 1 car is just a bonus, a lifetime ambition. It’s overwhelming, really.”

Of Force India he said, “They’ve brought up young drivers in the past, they have good experience with that and I am another one. I’m just here to do as good a job as I can and to help the team.”

The 24-year-old Briton is currently fifth in GP2 with ART in his second season. Calado has benefited from backing from the Racing Steps Foundation to get him to GP2 and is now managed by Nicolas Todt, but said he will have to earn an F1 chance on talent alone.

“Over the years it’s got tougher, money being a big factor,” he said. “I’m a believer that talent does show and that talent can get you through. All I can focus on is doing as good a job as I can, both in a GP2 car and on days like this.

“I’m not really thinking of the future too much – I do realize it will be hard, but I can only do the best I can.”

Calado handed over to Force India race driver di Resta for the final part of the day so the Scot could evaluate the new Pirelli tires. It is likely Calado will be drafted in to test again for Force India on either Thursday or Friday, although the team has not yet finalized its plans.