Scott Dixon completed a hat-trick of wins and shot up to second in the IndyCar championship with a commanding performance in the second race of the Toronto double-header. The Target Chip Ganassi Racing driver started from pole, and aside from the pit stops, was never headed.

“It’s quite a turnaround in a couple of weeks. I hope we can keep (momentum) going,” said Dixon, whose next race is Aug. 4 at Mid-Ohio, where he’s won in the past two visits.

His dominance was masked by the fact that the race finished under yellows, but his lead over pursuer Helio Castroneves was as large as 16 seconds before caution periods intervened.

Sebastien Bourdais finished third to end the weekend with a double-podium for Dragon; this time earning his stripes by passing Will Power on the final restart.

“Things just turned our way,” said Bourdais, whose push-to-pass malfunctioned at the start. “I had a really good car on the restart. I was hooked up.”

Power got out of shape in the process and drifted into Ryan Hunter-Reay, putting both into the wall. The unlucky Takuma Sato was left with nowhere to go and also ended up in the barrier.

Dario Franchitti’s race was compromised early on when he damaged his front wing against the back of Power’s car on the opening lap, forcing him to pit for repairs. He recovered up to 10th without the help of a caution period, and then capitalized on the late yellows to gain a further six places and salvage fourth ahead of EJ Viso and Charlie Kimball.

The Scot had one extra piece of good luck fall his way in that he was able to shed his red tyres when he stopped at the end of the first lap, taking advantage of a double-header rule that waives the requirement that the reds be used for a minimum of two green-flag laps.

Both of the race’s caution periods were caused by single-car accidents at Turn 5, the first coming courtesy of James Jakes before Ed Carpenter repeated the trick a few laps later. 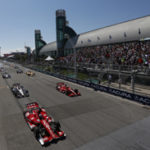 Tony Kanaan’s race also ended in the barriers, although he was able to get his car off the track without the race being interrupted.

The series made a second attempt at a standing start for Sunday’s race after Saturday’s was abandoned, and this time the procedure was completed with success.

The only driver who was not able to participate was James Hinchcliffe, who missed the start after developing a stuck throttle just prior to the installation lap. After repairs in the pits, he eventually joined the race three laps down.