Sports car ace Lucas Luhr will make his IndyCar debut at Sonoma Raceway in August after landing a one-off drive with Sarah Fisher Hartman Racing. The 34-year-old German, who won the 2011 GT1 World title and is on course to defend his American Le Mans Series LMP1 crown this year, will partner team regular Josef Newgarden at the California road course.

Luhr said that the drive had come about thanks to his links with Honda Performance Development, which is involved in his ALMS program with LMP1 squad Pickett Racing and also powers Fisher’s Indy machines.

“I’ve always wanted to have a go in an IndyCar,” he said. “When I was racing the Porsche RS Spyder with Penske, I was invited to the Indy 500 as a guest and it blew me away.

“This is not something I was pushing for, but I did let people at Honda Performance Development know that I would be interested. Then, this opportunity came out of the blue.”

Luhr, who will get two days of testing at Sonoma ahead of the race, explained that he believes that his LMP1 experience will mean he is well prepared to make his open-wheel return.

“I’m sure that a P1 car has more downforce,” he said. “I would say the performance of an IndyCar in the corners is somewhere between a P1 and an LMP2 car.”

Luhr, who leads this year’s ALMS LMP1 standings with Muscle Milk Pickett Racing co-driver Klaus Graf said that would be interested in contesting a full program in IndyCar in the future. 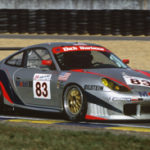 “There’s no question that I would like to do more, but I’m saying that before I know how I will get on with the car,” he said. “I’d love to have a go at the ovals. It would be tough, but sports car racing gives you a good understanding of that kind of wheel-to-wheel racing.”

Luhr gave up motorsport after the 1998 season to continue his education. He subsequently got a call to try out for Porsche’s Junior Program for 1999 and landed a drive in the Porsche Carrera Cup in Germany. That led to a full factory deal for 2000 (LEFT).