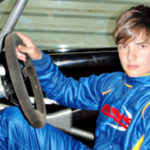 Scottish teenager Aiden Moffat will become the youngest driver in British Touring Car Championship history after signing to race the Finesse Chevrolet for the rest of the season.

He will continue his club racing campaigns as well as finishing the BTCC season in Finesse’s S2000 Chevrolet Cruze, starting with this weekend’s Knockhill round.

“I know the Knockhill circuit inside and out so that should help with my debut, but I am simply going to enjoy it,” he said.

“I’ve always dreamed about doing the BTCC and it’s always been in the plan, but it has come around sooner than we thought.

“My racecraft has really progressed and I’ve been up against some really tough racers in Scotland.

“I won’t be phased by the challenge, but I’ll certainly be taking it all in and looking to learn from the experience.”

The Finesse Chevrolet started the season in the hands of Joe Girling, but he withdrew after the Croft meeting in June.

Aiden Moffat’s BTCC debut this weekend will rob Tom Chilton of a record that he has held since April 2002; that of the youngest driver in series history.

The Finesse Motorsport driver will be very hard-pushed to make a similar kind of impact to the now RML Chevrolet World Touring Car frontrunner.

Chilton, just two weeks past his 17th birthday, had only a year of T-Cars and a handful of BRSCC Winter Saloon Cup races – the latter simply in a bid to gain licence signatures – behind him as his rookie BTCC season began.

But he had a pukka ex-works Vauxhall Astra Coupe – run by Barwell Motorsport – at his disposal and a well-known team-mate in World Superbike ace Aaron Slight as he arrived at Brands Hatch for his debut.

“I’d read the AUTOSPORT season preview that week,” Chilton recalled when asked about his debut for an AUTOSPORT feature in 2009.

“In it were the old guys, the seasoned professionals – Anthony Reid and Tim Harvey – saying I was too young for the BTCC and should go and do Clios with the other kids first. That upset me a bit.”

“As it transpired, I took Reidy off at the first corner and then near the end I had Tim off at Druids and finished on the podium [pictured].

“It was a case of ‘Hi, I’m Tom Chilton and I can race with you guys. Don’t say things about me until you know me’.”

Chilton’s third-placed finish marked him out as a name to watch for the coming years and made him the youngest podium-finisher in BTCC history – a record he is unlikely to lose any time soon.