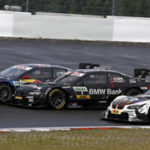 Bruno Spengler has refused to throw in the towel in the race for the DTM title, despite a collision with an Audi driver resulting in a second pointless race in a row at the Nurburgring last weekend.

The reigning champion lay only two points behind Mike Rockenfeller in the title race at the halfway point of the season, having won at Spielberg and taken a second place at Brands Hatch.

But since then he has dropped to fourth place – 39 points adrift of the German with only three races to go – and also behind Mercedes drivers Christian Vietoris and Robert Wickens.

The Schnitzer BMW driver told AUTOSPORT: “39 points looks hard as there’s only 25 for a win, but it’s still possible.

“You see how the wind can change quickly in this championship; Mercedes were struggling and now they’re on top, we were quickest at the start of the year and now we’re struggling.

“Audi could go into a spiral now and if they do we have to be ready to hit back and get a lot of points now. I’m ready for that.”

SPENGLER: COLLISIONS COULD COST ME TITLE

Spengler believes he was on course for a podium finish at Moscow before being spun down the order by Rockenfeller’s Phoenix Audi team-mate Miguel Molina.

The Canadian is certain that a top-six finish would have been possible at the Nurburgring had he not had contact with another Audi driver Filipe Albuquerque mid-race.

While he held back from directly accusing Audi of instructing its drivers to weaken his position against Rockenfeller in the title fight, he believes the two collisions will be to blame if he fails to retain his title.

“Everyone who has eyes can see what happened in Moscow and what happened here, so I don’t think I need to comment on this,” he added.

“I’ve lost a lot of points in Russia and here because after the contact, when your car is damaged, you can’t follow another car you definitely can’t overtake one.

“If I am not champion again, it’s definitely in these two races where it’s cost us.”