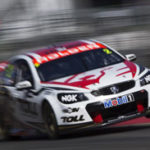 Holden says it remains committed to V8 Supercars despite question marks over its manufacturing future in Australia.

Following news that its historic rival Ford would halt production in Australia by 2016, it emerged that Holden’s future in the country was also in the balance if it could not reach a co-investment deal with the new government after the upcoming elections.

Despite this, Holden managing director Mike Devereux told the official V8 Supercars website that it intends to continue in the sport.

“Racing is a natural for us, we are absolutely committed to V8 Supercars,” he said.

“I think we get good value from being involved in the sport and it is part of our DNA.

“The sport is looking fairly robust. There are couple of new teams in there that are showing up well, so I think the sport is pretty healthy.”

Holden is currently ruling the V8 roost with the Triple Eight squad, while its works-backed Holden Racing Team operation has returned to the front after a difficult period.

Works Ford V8 team Ford Performance Racing is still waiting to hear what effect the Blue Oval’s decision to pull out of Australian manufacturing will have on its funding.

For many years Holden and Ford supplied the entire V8 grid, but this season they were joined by a works Nissan effort and a Mercedes programme run by Erebus Motorsport.

Volvo will also join the fray next season.