Briscoe cleared to return at Sonoma

Briscoe cleared to return at Sonoma 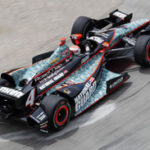 Ryan Briscoe has received medical clearance to return to IndyCar from this weekend’s Sonoma round after his recent wrist injury.

The Australian broke his right wrist when his Panther car was collected by Ganassi’s Charlie Kimball during the Toronto round in July.

Briscoe took part in last week’s Sonoma test and has now been given the official green light to return to racing.

“I’m obviously very happy to be back with the team and in the National Guard car,” Briscoe said.

“My wrist held up pretty good during the test, although the brace was a bit of a nuisance. But we made good progress during the test and worked through our programme really well.

“I was pleased with our pace and definitely looking forward to coming back next week to find more speed.”

Panther team boss John Barnes added: “We knew Ryan was a tough guy and would bounce back from his wrist surgery quickly. He looked great at the test.”

Indy Lights championship leader Carlos Munoz and veteran Oriol Servia – who had initially shared the drive with Briscoe after JR Hildebrand’s sacking – had outings in the #4 car while Briscoe was sidelined.