AJ Allmendinger spent most of Saturday afternoon in front, then held on for an extra few laps to earn his second career NASCAR Nationwide Series victory in the Nationwide Children’s Hospital 200 at Mid-Ohio Sports Car Course.

He had a comfortable lead over pole winner Michael McDowell but had to sweat out a green-white-checkered finish after Kenny Habul triggered a course-wide caution on the penultimate lap. It was no problem as Allmendinger sprinted away on a lap 93 restart and stayed in front for the final two laps.

Allmendinger lost the lead after a lap 58 pit stop and took it back five laps later. He kept his No. 22 Ford Mustang in front of the pack after a lap 67 restart and cruised to his second NASCAR Nationwide road-course win in as many tries this season.

“The car was just amazing,” said Allmendinger, who won for the same team in his only other start June 22 at Road America. “It was so good those last 20 laps.”

Allmendinger started second and needed just eight laps to take the lead after the green flag. He led 27 straight laps midway through the race and was in front for the final 29. He also won the June 22 Johnsonville Sausage 200 Presented by Menards at Road America, his only other NASCAR Nationwide start this season. He led 73 of the race’s 94 laps. McDowell led the next most with eight.

Allmendinger isn’t competing for the series title but those that are saw all sorts of changes at the top.

Hornish started the race three points behind series leader Austin Dillon but left Mid-Ohio with a 13-point lead with 11 races remaining. Dillon, who finished 21st, dropped into a tie for third with Regan Smith, who spun early in the day and fell out of contention.

The top five are separated by 18 points.

McDowell led the first eight laps from the pole but gave way to Allmendinger, who dominated large stretches of the third and final road race on the NASCAR Nationwide schedule.

Michael McDowell, in just his fifth NNS start of the season, secured his second career Coors Light pole with a fast lap of 96.256. 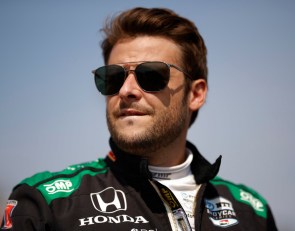 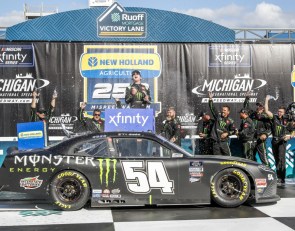 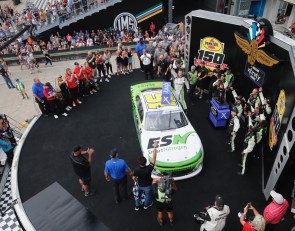