Kimi Raikkonen believes the consistency that has taken him to second in the Formula 1 standings will not be enough to fight Sebastian Vettel for the world championship.

The Finn re-took second in the drivers’ championship from Fernando Alonso with his sixth podium finish of the season in the Hungarian Grand Prix, finishing ahead of Vettel to close the German’s points lead to 38.

While Raikkonen said he was pleased to be back in second in the standings, he also stressed the importance of adding to his victory in the season-opening Australian Grand Prix is he is to fight Vettel for the title.

“I am now back in second which was a good way to enter the summer break,” said Raikkonen, who has finished second five times this year. “I finished ahead of Seb in Hungary. To beat him [in the championship], we need to be winning races.

“If we keep finishing second like we’ve done many times this year it’s probably not going to be enough, but you never know what might happen.”

Raikkonen added that he needs to up his game in qualifying if he is to start turning podium finishes into victories.

“Well, obviously I keep making my life difficult on Saturdays in qualifying, so then we pay a price,” he said. “But we still have a good car in the race. Now we have tyres that are a little bit different we have to understand exactly how to use them. 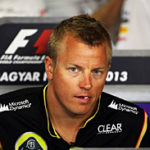 “We made progress in Budapest so it should be easier in Spa, but that will be the same for everyone. To win, it’s always better to be starting near the front.

“So much depends on the qualifying result, so we need to find a decent setup on Friday and Saturday and have a solid qualifying session.”