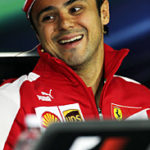 Felipe Massa believes the Formula 1 summer break will be crucial for Ferrari to try to regain its form after a difficult end to the first half of the season.

The Italian squad has won two races this year thanks to Fernando Alonso, but the team has been losing ground to its main rivals and has not won since May. Although teams are not allowed to work during a part of the summer break, Massa thinks it is vital that Ferrari makes the most of the time that it has to bring it closer to the front of the field at the Belgian Grand Prix next week.

“The development work is very important. We need to make this car quicker,” said Massa. “So it’s a very important four weeks from one race to the other.

“We know that we have a break for everybody, and the team needs to be closed for two weeks. Nobody can work. But the working and thinking are important to bring new pieces for the next race, and have a more competitive second half of the season than the first one.”

Massa feels the tires introduced by Pirelli in Hungary may help Ferrari’s cause, although he believes it will still take time to see the real effect of the new rubber.

“We’ve seen teams like Mercedes doing a good job on these tires,” he said. “Our car was not as competitive as expected. This is the most important thing.

“On a track where the temperature is high, normally they [Mercedes] have more problems, and they won a race. So maybe these tires will be better for the teams, but we have to wait a couple of races, on different tracks, to be sure.”