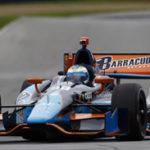 Luca Filippi and JR Hildebrand will share Bryan Herta Autosport/ Barracuda Racing’s IndyCar entry for the rest of the season.

Former driver Alex Tagliani stood down prior to the last round at Mid-Ohio to give GP2 veteran Filippi a race opportunity, as BHA tried to turn around what has been a poor season so far. The team has now announced that Filippi will return for the Baltimore and Houston street races,

It has also recruited Hildebrand, who lost his Panther seat following the Indianapolis 500. The Californian will race for BHA in the next round at Sonoma and on the Fontana oval.

“JR is an exciting prospect for us,” said team co-owner Bryan Herta. “He’s a talented driver and it made sense for him to be able to compete at his ‘home’ races in Sonoma and Fontana.

“We were also very impressed with Luca and happy to give him two more outings. He made a good impression on everyone, and this will allow him the chance to race on street circuits.”

Filippi finished 16th on his IndyCar debut at Mid-Ohio earlier this month.