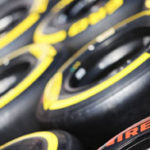 The Italian manufacturer has been eager to finalize a new F1 supply deal for next year as its current contract runs out at the end of 2013. Hembery went as far as saying Pirelli could quit F1 if no deal was agreed quickly.

Although Pirelli is understood to have agreed a commercial deal with most teams, there has been no news from the FIA. Hembery admitted the situation is strange, as Pirelli continues to work toward 2014 with teams and the ruling body.

“It is the most bizarre situation,” said Hembery. “We have agreements in place with vast majority of people involved, but there is not a clearly defined process.

Hembery believes his company is back on the right path with its tire choices following the dramas seen during the British Grand Prix.

“We wanted to get things back on line,” he said. “It was different type of race in Hungary and Nurburgring but we’ve seen some good racing.

“The last two races are a good testimony to what we have been asked to do. It’s been good.”