Lucas Luhr and Klaus Graf made it five American Le Mans Series wins in a row as Muscle Milk Pickett Racing dominated at Road America, while the SRT Viper claimed its first GT win. The race also marked a breakthrough in competitive pace for the DeltaWing (leading, LEFT).

Dominik Farnbacher and Marc Goossens held on for the new Viper’s first triumph despite running very marginal on fuel in the closing stages of the race. Jonathan Bomarito in the No. 93 Viper led the early running, but Farnbacher was soon in front in as a slightly jumbled order caused by teams switching to dry tires at different times sorted itself out at the end of the first hour.

However, after a second caution period, it was the two Corvettes that led, requiring Goossens to hunt and pass the Antonio Garcia/Jan Magnussen car for the win 40 minutes from the end. Garcia held on for second ahead of the sister car of Oliver Gavin and Tommy Milner.

“Man, it was a great race,” Goossens said. “We gambled a little bit on the fuel. We had to save fuel, but we had to push as well. There is no secret the last [caution period] helped we were very low to save the least.”

Flying Lizard’s Spencer Pumpelly and Nelson Canache Jr. beat Cooper MacNeil and Jeroen Bleekemolen to the GTC class win. The decisive moment came 45 minutes from the end when Pumpelly passed both Bleekemolen and Andy Lally as the pair almost forced each other off the track. 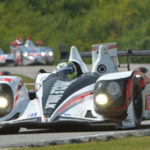 In LMP1, Luhr had established a 16-second lead after just six laps but Katherine Legge jumped ahead of Chris McMurray at the start of what would turn into an impressive stint in the DeltaWing.

Legge and teammate Andy Meyrick had turns at the head of the field as the pit strategies played out, before Graf took charge in the final hour.

“Every time we go out, the car is more reliable,” said Legge, who recorded her best finish in four races with the team. “Today we’re starting to show how revolutionary this car can be, and we really showed the excellence of what the DeltaWing is all about.”

A late safety car, caused by a big off for GTC driver Jan Heylen, meant the race finished under caution, and while the Muscle Milk HPD comfortably held on, Level 5 claimed a narrow LMP2 class success.

Scott Sharp led early on for Extreme Speed after Ricardo Gonzalez spun the leading No. 552 Level 5 HPD exiting Turn 3, and dropped to third behind the sister No. 551 car driven by Scott Tucker. He recovered one place in the pits, leapfrogging Sharp, and assumed the lead once Tucker pit on the hour mark.

Franchitti, who was quickest in qualifying, took over from Gonzalez and fought off a determined challenged from Guy Cosmo until the final pit stops, when the Extreme Speed car swept by into Turn 1 as the Scot emerged from the pits. But both cars were jumped by Simon Pagenaud, who made a two-stop strategy work after taking over from Tucker to claim the lead and subsequently, the victory just before the yellow flags came out, denying a grandstand finish.

“I was able to stay out for the full hour on the rain tires which gave us a bit of an advantage,” Tucker said. “Then Simon got in and could capitalize on it. We could keep some severe pace up all day.”

“This is the track where I got my first [CART Champ Car] win in 2001, so every time I come to Road America is very special for me,” Junqueira said. “This is my favorite track, and to win here again is great.”