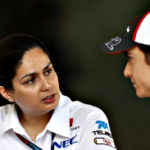 Sauber team boss Monisha Kaltenborn is sure Esteban Gutierrez is capable of delivering point-scoring finishes for the Swiss squad.

The Mexican, the youngest driver on the grid at 22, is yet to finish in the points and has two 14th-place finishes as his best results so far in his rookie season. Teammate Nico Hulkenberg has finished in the points four times and has outqualified Gutierrez in all races.

Kaltenborn acknowledges that Sauber’s uncompetitiveness has made Gutierrez’s life difficult, but she believes he has the potential to produce better performances.

“Yes, I am sure about that,” said Kaltenborn when asked if Gutierrez can score. “It has been a very tough season.
The challenge to come into Formula 1, and get used to this environment, is a big step in itself. Then of course if the car is not as competitive as we expected it to be, if you simply have bad luck then it is very tough on the driver. And that’s where we need to make sure he keeps his motivation high and try to support him finding consistency.

“We have seen even on Fridays that he is there in his moments, and we need to get more of that out of him.”

Kaltenborn reckons the summer break will be important to Gutierrez to refocus and come back a stronger driver when action resumes at the Belgian Grand Prix.

“There has been so much going on especially with the rumors around the team, the situation, not being able to do everything we wanted to implement and it does take a toll on the drivers, especially when you are new in Formula 1,” she said. “It’s good he can reflect on all this, have this time to reassess his position, what he has done right and what hasn’t gone so well, and I am sure he will come back stronger.”