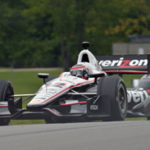 A last-gasp effort from Will Power was rewarded with the bragging rights after the second IndyCar practice session at Mid-Ohio.

Penske driver Power registered a 1m05.4332s on his final lap to take the top spot from Ganassi’s Scott Dixon, who had also done his best time right at the end but finished up 0.01 seconds short.

Until the last couple of minutes the benchmark had been Ryan Hunter-Reay, whose time was still good enough for third-fastest ahead of Dario Franchitti, while series debutant Luca Filippi did a great job to finish up fifth for Bryan Herta Autosport.

The afternoon was interrupted by two brief stoppages, the first coming when James Hinchcliffe went off at Turn 11 and the second when Tony Kanaan hit the tyres at Turn 12, although both were able to rejoin the session later.