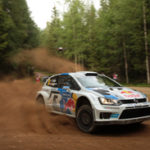 Sebastien Ogier has admitted he has long dreamed of being in the lead of Rally Finland going into the final day, but he says he still will not risk all to win the event.

The Volkswagen driver leads by 38.1 seconds at the end of the penultimate day of the event, but remains focused on his chances of a first World Rally Championship title later this season.

“Definitely I have dreamed of this moment,” he said, “dreamed of going through Ouninpohja in the lead of Rally Finland.

“I want to win, that is the dream, but maybe it’s not the target this year – I have the title in mind.

“But let’s see what happens tomorrow. Anything can still happen, but, for sure, it will be a big pleasure to drive through Ouninpohja.”

The two M-Sport drivers behind Ogier – Thierry Neuville and Mads Ostberg have vowed to fight to the finish. They are currently just 0.9s apart in second and third.

The Belgian said: “I’m going to risk everything to keep this place.”

Ostberg added: “I want the position he has and I will push to take it. I haven’t had any moments today, which was good but maybe that means I’ve been going too slowly. I won’t tomorrow.”

“The instruction is to continue at the same pace as today they are in different [M-Sport teams] so [the fight] is not a concern,” he said.

“I’ve been really impressed with the speed the guys have shown to lead this event, they’ve both got a great future.”