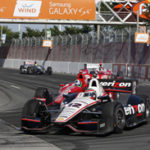 IndyCar has made three significant tweaks to its rulebook ahead of this weekend’s race at Mid-Ohio.

The first of the changes affects restarts, with revisions to rule 7.6.1.2 now stipulating that in the event of a restart with 15 or less laps remaining, lapped cars will be moved to the rear of the field.

Secondly, rule 9.2.2 now instructs that when circumstances prevent a penalty from being served during a race, the results will be declared provisional until the relevant incident is reviewed by race officials. Any review would be independent of technical inspection.

This rule would help to avoid situations such as that in Toronto, where Dario Franchitti finished on the podium, had a post-race penalty applied for blocking, and then had his original result reinstated upon review of additional evidence.

Finally, under rule 14.14.6.6.5, a car will have been deemed to have completed its two-lap minimum for a specific type of tyre if that tyre sustains damage due to contact during the race.

All three of the revisions come into effect immediately.