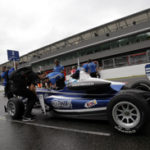 Chinese racer Peter Li Zhi Cong will join Carlin’s line-up for the next round of the British Formula 3 International Series at Brands Hatch on August 10/11.

Li’s main programme is in the Asian Porsche Carrera Cup, in which he lies 11th. He had hoped to make his F3 debut last weekend at Spa, but logistical problems prevented him making the trip to Belgium.

The 19-year-old, who has single-seater experience in Asian Formula Renault and Formula Pilota China (for Formula Abarth cars), has already tested with Carlin.

Team principal Trevor Carlin said: “He did four days at Pembrey and Snetterton. He made no mistakes, didn’t crash and we are sure he will do a professional job.”

Li added: “In 2012 I was taking part in the Macau GT Cup and Carlin’s victory [with Antonio Felix da Costa in the Grand Prix] caught my eye.

“Since I started racing I always wanted to compete in an F3 car, and British F3 is the right choice due to its history and demanding British circuits.

“Brands will be my debut in the European racing scene. The car is great, but I have limited experience, so I can’t expect to fight for the top places.”