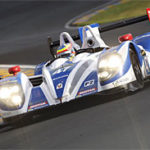 The grid for new Asian Le Mans Series will grow over the remainder of the season from the 11 cars entered for this weekend’s championship opener at the Inje Speedium in South Korea, according to the series boss.

Mark Thomas admitted disappointment with the entry for the first of this year’s four Asian LMS races, but insisted that more cars would arrive before the end of the season.

“Of course we would have liked more, but the most important thing is that we are here and the race is on,” he told AUTOSPORT from Inje. “Now we have proved that the series is real, other entrants can start contemplating us as a viable option.

Eight to 10 GT300 cars from the Super GT Series will join the Asian LMS grid for what will also be a round of their championship at Fuji next month.

The grid for Sunday’s has been boosted by the addition of three cars to the provisional entry list revealed last month.

The AAI team, a regular in the Asian GT Series, has upped its entry from one to two GTC class McLaren MP4-12Cs, while there will also be two Lamborghini Super Trofeo one-make racers on the grid.

Thomas revealed that uncertainty over the South Korea race due to management problems at the circuit last week put off a couple of potential entrants from Japan.

The entry at Inje, which was originally to be called Autopia, is led by two Morgan-Nissan LMP2s run by the works OAK Racing and Chinese KCMG squads.

Ho-Pin-Tun, who raced in GP2 for three seasons, leads the line-up in the OAK car.

There are five GT3 cars, one GT300 and the two Lambos running in the GTC division and a solo GTE class Ferrari 458 Italia entered by former Le Mans 24 Hours class-winning team Taisan Racing.