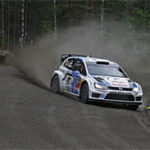 Thierry Neuville and Sebastien Ogier hold a joint lead of Rally Finland after sharing the stages wins on the opening afternoon.

Championship leader Ogier won the first and third stages, but dropped time in the second as Neuville went quickest.

The Frenchman was then the only driver to complete the Koukunmaa stage in under seven minutes, his run of 6m59.4s almost a second quicker than the Belgian could manage.

Mikko Hirvonen is just 1.1s behind the tied duo, as even the 8.5-mile SS3 failed to spread out the leaders.

Ogier’s VW team-mate Jari-Matti Latvala should also be in the fight, but damaged a suspension arm during the second stage after finishing behind the lead Polo on the first.

A superb run from Kris Meeke helped him claim third on SS3 and hold seventh position on his competitive debut in the Abu Dhabi Citroen DS3.

He was 14s ahead of Citroen regular Dani Sordo, who continued to struggle in the lower reaches of the top 10.