RACER has confirmed Panther Racing’s Ryan Briscoe, who fractured his right wrist in an impact during Race 1 at Toronto on July 13, will be sidelined for this weekend’s Honda Indy 200 at Mid-Ohio.

“I was pushing pretty hard to do Mid-Ohio, and I’ve never been through this before so it’s all pretty new to me,” he said. “I knew last Friday I wouldn’t be able to drive this weekend, and spoke with the doctors who said jumping into an Indy car or any carjust two and a half weeks after breaking my wrist, was not going to happen. All I wanted to do was drive, so it was a reality check I needed, I guess, and bending my wrist back still hurts badly, so Mid-Ohio wasn’t really an option.”

The IndyCar Series limits the types of pain killers that can be used to manage a situation like Briscoe has been enduring, leaving the Aussie to wait as his body heals on its own.”There’s only so much they let you take, so I had to make the decision to not do Mid-Ohio, but plan to do Road America the following weekend,” he noted. “The bruising has actually been the most painful part. The bruising goes all the way up to my elbow and on top of my hand, which really hurts, but the swelling has gone down pretty good and I can make a solid fist, but it’s still early days.”

Briscoe was in Indianapolis over the weekend for the combined Grand-Am/NASCAR weekend at the Brickyard, and says he’ll return on Tuesday to take the next step in his recovery process.

“I’m having my stitches taken out tomorrow in Indy and getting a carbon splint for my hand, then will start rehab. Everything up to now has been about letting the bone heal, but that’s about to be sped up to get more flexibility and strength going.”

The 31-year-old will likely get his first chance to drive the week after Mid-Ohio when he and the Level 5 Motorsports American Le Mans Series team visit Wisconsin for the next sports car round.

“As long as I can turn the wheel at Road America, I’ll be OK,” he confirmed. “It will be tough, but I’m confident I’ll be all right. We have power steering, which will make things easier. Realistically, my next time in an Indy car will be testing with Panther at Sonoma, but Sonoma is one of the heaviest places we go to for steering. I’ll have some more time to recover before that race, so I hope I won’t have any limitations for the rest of the season.”

Interest in Briscoe continues to build within the IndyCar paddock as Panther Racing and Ganassi Racing would like to secure his services for 2014 giving the eight-time IndyCar race winner plenty to think about.

“I’ve always been a huge fan of sports car racing, but it’s no secret my heart is with open-wheel racing and getting back to a full-time drive next year,” he said. “In a perfect world, I could race in the IndyCar Series and also race in sports cars because it’s something I truly enjoy. Being with the Level 5 team has been awesome, so whatever the future holds, it would be great to race in both places.”

The Panther team has yet to announce its driver for Mid-Ohio, but it’s believed Oriol Servia will return to pilot the No. 4 National Guard Chevy for the first time since placing seventh last month at Iowa (BELOW). 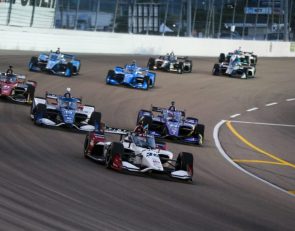