IndyCar team Andretti Autosport will field a team in the FIA’s new Formula E all-electric championship, which will include two U.S. rounds.

Michael Andretti’s squad has taken Tony Kanaan, Dan Wheldon, Dario Franchitti and last year’s title winner Ryan Hunter-Reay to IndyCar crowns and won the Indianapolis 500 with both Wheldon and Franchitti. Andretti now joins the Drayson and China teams among the first of the 10 squads expected for Formula E’s inaugural season in 2014.

“It’s an honor for Andretti Autosport to have been selected as one of the 10 founding Formula E teams for the inaugural season,” said Michael Andretti. “I look forward to further exploring the series and helping build the future of open-wheel racing across the world.”

Formula E chief Alejandro Agag added: “We are absolutely delighted to welcome Andretti Autosport to the series, a team with an incredible racing pedigree and track record which I have no doubt is going to make a big contribution to the FIA Formula E Championship.

“It’s fantastic too for such a highly established outfit to show its commitment to sustainable motoring and with two U.S. races on the inaugural calendar Los Angeles and Miami I’m sure American motorsport fans will have a lot to cheer come race day.” 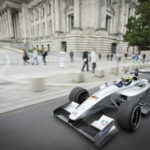 Formula E’s first season will run from September 2014 to June ’15, running entirely on street circuits, including one in London. Berlin was unveiled as the final venue on the calendar last week.